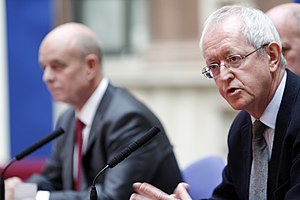 Who is Keith Jeffery?

Keith Jeffery, MRIA is a Northern Irish historian specializing in modern British, British Imperial, and Irish history. Having obtained his BA, MA, and PhD degrees from St. John's College, Cambridge, the latter under the supervision of John Andrew Gallagher, he is currently the Professor of British history at Queen's University Belfast. In 1998, Jeffery served as the Lees Knowles Lecturer at Trinity College, Cambridge, and in 2003–4 the Parnell Fellow in Irish Studies at Magdalene College, Cambridge. He has also held visiting positions at the Australian National University, the Australian Defence Force Academy and Deakin University. Although much of his work has been devoted to military history, his research has more recently focused on the history of intelligence gathering. In 2005, he was commissioned by the British Secret Intelligence Service to write an authorized history for the organization's centenary, covering its founding in 1909 up through to 1949. It was published in 2010. A related study, The Defence of the Realm: The Authorized History of MI5 by Christopher Andrew was published in 2009.

Discuss this Keith Jeffery biography with the community: