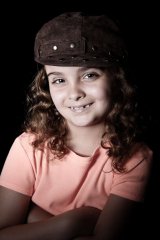 Who is Lainie Corryn Manero?

Born Lainie Corryn Manero Sept 7 2004 in New Braunfels, TX. Starting at an early age of 3, She began dancing around to music. She took an interest in Music, dance and gymnastics at the age of 5. She began memorizing lines of all her favorite TV shows. After going to a Pro Scout invitation in Dallas, TX, she met her acting coach, Chambers Stevens. She has been working with him for 2 years and is constantly growing in her acting ability. After getting recast from her first audition of a indie feature film. She appeared in 2 student films and then landed the lead role in the indie film, The Box: Emma's Journey (2013). She later played Alyson Clark in the TV series; Avery Park (2014).

Discuss this Lainie Corryn Manero biography with the community: