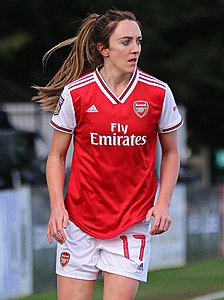 Who is Lisa Evans?

Lisa Catherine Evans is a Scottish professional football forward, playing for Turbine Potsdam in the Frauen Bundesliga. She helped Glasgow City reach the 2012 Champions League's Round of 16 with three goals against Valur Reykjavík.

She made her debut with the Scottish national team against Wales in October 2011. In February 2012 Evans scored her first international goal in a 5–1 friendly win over Northern Ireland in Belfast.

Evans joined Glasgow City from St Johnstone Girls in August 2008. In February 2012 German champions Turbine Potsdam invited Evans for a trial, after spotting her in their 17–0 UEFA Women's Champions League aggregate win over Glasgow City. On 12 June 2012 it was revealed that she had signed a professional contract with Potsdam.

Turbine's veteran coach Bernd Schröder extended Evans's contract by a further two years after being impressed by the start she made: "It means we’re able to secure the long-term services of a player who has developed a lot over the last few weeks and months. Lisa has fitted in really well to the philosophy of the club as a footballer and as a person, and is an enormous benefit to the team."

Discuss this Lisa Evans biography with the community: