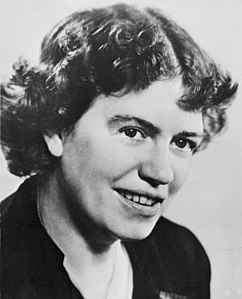 Who was Margaret Mead?

Margaret Mead was an American cultural anthropologist, who was frequently a featured writer and speaker in the mass media throughout the 1960s and 1970s. She earned her bachelor degree at Barnard College in New York City, and her M.A. and Ph.D. degrees from Columbia University.

She was both a popularizer of the insights of anthropology into modern American and Western culture and a respected, if controversial, academic anthropologist. Her reports about the attitudes towards sex in South Pacific and Southeast Asian traditional cultures amply informed the 1960s sexual revolution. Mead was a champion of broadened sexual mores within a context of traditional western religious life.

An Anglican Christian, she played a considerable part in the drafting of the 1979 American Episcopal Book of Common Prayer.

Discuss this Margaret Mead biography with the community: