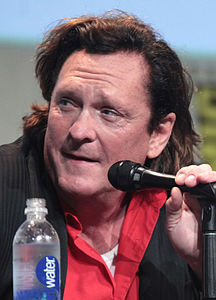 Who is Michael Madsen?

Michael Søren Madsen is an American actor, poet and photographer. He has appeared in more than 150 films, many of which have been independent films, though he has starred in central roles in such films as Reservoir Dogs, Free Willy, Vice, Donnie Brasco and Kill Bill, in addition to a supporting role in Sin City. Madsen is also credited with voice work in several video games, including Grand Theft Auto III, True Crime: Streets of L.A., DRIV3R, Dishonored, Call of Duty: Black Ops 2, and The Walking Dead: Season Two. In January 2012, Madsen was a housemate in the British reality show Celebrity Big Brother 9. In 2013, he voiced Finn O'Leary of "Mob of the Dead" Call of Duty: Black Ops II.

Discuss this Michael Madsen biography with the community: