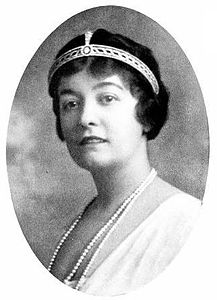 Who was Millicent Hearst?

Millicent Hearst, née Millicent Veronica Willson, was the wife of media tycoon William Randolph Hearst. Willson was a vaudeville performer in New York City whom Hearst admired, and they married in 1903. The couple had five sons, but began to drift apart in the mid-1920s, when Millicent tired of her husband's longtime affair with actress Marion Davies.

Discuss this Millicent Hearst biography with the community: