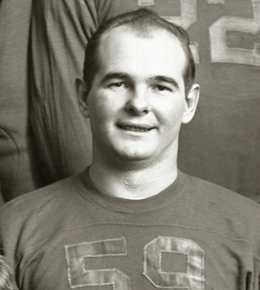 Who was Milo Sukup?

Milo Frederick Sukup was an American football player and coach. He played college football for the University of Michigan from 1938 to 1940, where he was the running guard and a key blocker for Heisman Trophy winner Tom Harmon. He sustained a head injury late in his senior year that ended his football career. He was the head football coach and athletic director at Union High School in Grand Rapids, Michigan from 1942 to 1971.

Discuss this Milo Sukup biography with the community: