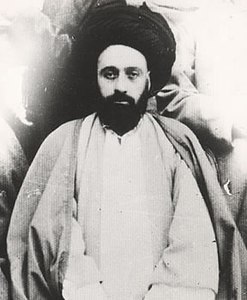 Who was Mirza Abutaleb Zanjani?

He was born on 10 December 1843, to an educated family in Zanjan, Iran. His paternal ancestors were all celebrated scholars. He started his education in his birthplace and continued in Qazvin, Iran and Najaf, Iraq, trained under Morteza Ansari, Sheikh Razi and Sayyid Hossein Kooh-kamari. He returned to Iran at the age of 40 and stayed in Tehran, where as a distinguished disciple of Koohkamari, became the centre of clerical circles.

He spent most of his time on teaching his students and writing religious books.

He advocated Persian Constitutional Revolution, but later adhered to royalists.

Zanjani was among the few scholars of Qajar period who used their Arabic knowledge to translate Arabic texts into Persian. In addition to Persian and Azari, he had acquaintance with French and Ottoman Turkish language. He also had knowledge of ideas of his contemporary European intellects such as Thomas Malthus and Charles Darwin, and used their views in his essays.

Discuss this Mirza Abutaleb Zanjani biography with the community: