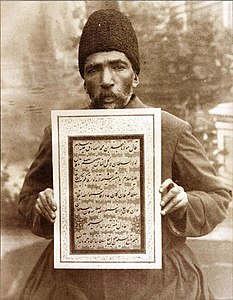 Who was Mirza Mohammad Reza Kalhor?

Mirza Reza Kalhor was a 19th-century Iranian calligrapher of Kurdish origin, known for his mastery of the nastaʿliq technique. A member of the Kalhor tribe of Kermanshah, he initially followed the typical tribal path, learning horsemanship and sharpshooting. He also gained an interest in calligraphy, and left the tribe for further training. During his career, he introduced several innovations to nastaʿliq calligraphy, changing both the aesthetics and mechanics of the technique. He died of cholera in Tehran at age 65, having sired nine children and taught many calligraphy students, several of whom went on to become notable in their own right.

Discuss this Mirza Mohammad Reza Kalhor biography with the community: