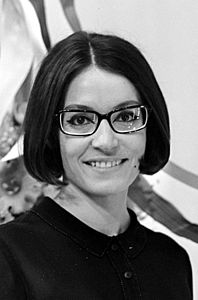 Who is Nana Mouskouri?

Nana Mouskouri, born Iōánna Moúschouri on October 13, 1934, in Chania, Crete, Greece, is a Greek singer who is claimed to have sold over 200 million records worldwide. She was known as "Nána" to her friends and family as a child.

Mouskouri was sometimes described as Europe's answer to Barbra Streisand; her distinctive, angelic soprano voice was the result of having been born with only one vocal cord. Her repertoire supported the mainstream appeal she aimed for: jazz standards, well-known pop tunes from before and after the rock era, French cabaret chansons, movie songs, classical and operatic repertory, religious music, folk songs from her native Greece and elsewhere.

Discuss this Nana Mouskouri biography with the community: