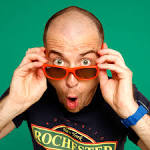 Who is Nice Peter?

Peter Alexis Shukoff, also known as Nice Peter, is a comedian, musician and personality. A self-described "Comic/Guitar Hero," he is best known for the comedy on his YouTube channel, NicePeter, especially the comedic series Epic Rap Battles of History. As of September 6, 2013, NicePeter has over 2.3 million subscribers. The day after hitting one million subscribers, the video game channel G4 crowned Nice Peter the King of Dot Comedy on Attack of the Show. His two channels, Nice Peter and Epic Rap Battles have a total of 9.4 million subscribers and over a billion views as of September 2013. They have been featured on the Huffington Post, Billboard.com, and the January issue of Wired. An interview with Forbes details Peter and his partner Lloyd Ahlquist's rise to fame.

Discuss this Nice Peter biography with the community: