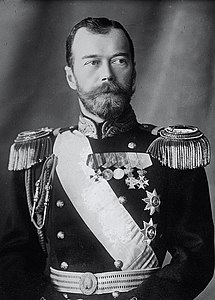 Who was Nicholas II of Russia?

Nicholas II of Russia (Nikolai Aleksandrovich Romanov) (18 May[O.S. 6 May]1868 – 17 July[O.S. 4 July]1918) (Russian: Никола́й II, Nikolay II) was the last Emperor of Russia, King of Poland, and Grand Duke of Finland. He ruled from 1894 until his forced abdication in 1917. Nicholas proved unable to manage a country in political turmoil and command its army in World War I. His rule ended with the Russian Revolution of 1917, after which he and his family were shot by Bolsheviks. Nicholas's full name was Nikolay Aleksandrovich Romanov (Никола́й Алекса́ндрович Рома́нов). His official title was Nicholas II, Emperor and Autocrat of All the Russias. He is sometimes referred to as Nicholas the Martyr due to his execution and as Bloody Nicholas because of the tragic events during his coronation and his government's subsequent suppression of dissent. As a result of his canonization, he has been regarded as Saint Nicholas The Passion Bearer by the Russian OrthodoxNicholas was determined to uphold authority yet lacked assertiveness. He was Obstinate, ineffectual, easily influenced. He had genuine affection for the people but expected them to be blindly obedient. He was as a ‘little man lost in the immensity of his realm’ The Reign of Nicholas up to 1905 He has a bad start to his regime. In 1895 Members of the Tver Zemstvo requested opportunity to express opinions to the government; Nicholas rejected them as ‘senseless dreams’. The Celebrations at his coronation contained free beer stampede, 1300 dead. Nicholas II carried on celebrations by attending a French Ball, visiting hospitals next day. This did great damage as he was seen as uncaring, reinforced on Bloody Sunday (1905) Reform requests were rejected by Nicholas. University unrest grew, 1899 student protests suppressed and universities were closed. Many students joined the SRs who increased assassinations, e.g. Interior Minister (Plehve). Russification continued. The unrest in the Countryside grew as with land hunger plus SR propaganda. Towns’ unrest e.g. 1896 St. Petersburg strike, Led Zubatov (Moscow Okhrana chief) to set up a union to monitor unrest. However it failed as it became involved in General Strike in Odessa in 1903 and Zubatov was dismissed. Father Gapon was allowed to set up ‘The Assembly of Russian Factory Workers’ to channel unrest however it Backfired and led to Bloody Sunday involvement. By 1900a Cross-section of society was discontented, Reformist / revolutionary ideas were spreading and Peasant uprisings, assassinations, strikes1906 – 14: The Dumas The October manifesto decreed that no law should come into force without the consent of the state Duma.Witte resigned just before the first duma to be replaced by Goremykin (conservative). Govt cabinet contained no progressives Duma (1): April to June 1906 Top parties = Labourists (SRs had boycotted), Kadets (REFORMIST)Liberals had high hopes – expected to be able to debate the big issuesNot offered by the govtTsarist regime recovering after 1905Early 1906 govt had a big loan from the French (no financial hold could be gained by the Duma)Fundamental Laws restrictiveBi-cameral duma – elected lower house plus State Council (appointed)Right of vetoOverall no intention of allowing the duma powerBitter mood, voiced anger, far from compliant – felt betrayedDissolved in atmosphere of violence200 deputies reassemble at Vyborg – ‘Appeal’ urging people to stop paying taxes and disobey conscription. Reaction was scattered violence rather than passive resistance – arrested and debarred from future. No real defence of the duma…prelude to Stolypin repressionLong-term effects – Kadets never really recover from humiliation, liberals discredited, played into the hands of the extremes Duma (2): February to June 1907 Vyborg – Kadets lost half their seats (two leading Kadets assassinated during elections)Still no...

Discuss this Nicholas II of Russia biography with the community: