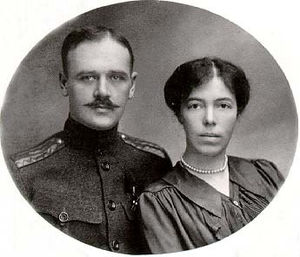 Who was Nikolai Kulikovsky?

Nikolai Alexandrovich Kulikovsky was the second husband of Grand Duchess Olga Alexandrovna of Russia, the sister of Tsar Nicholas II and daughter of Tsar Alexander III.

He was born into a military landowning family from the south of the Russian Empire, and followed the family tradition by entering the army. In 1903, he was noticed by Grand Duchess Olga during a military review, and they became close friends. Olga wanted to divorce her first husband, Duke Peter Alexandrovich of Oldenburg, and marry Kulikovsky, but neither her husband nor her brother, the Tsar, would allow it.

During World War I, Olga eventually obtained a divorce and married Kulikovsky. They had two sons. Her brother was deposed in the Russian Revolution of 1917, and Kulikovsky was dismissed from the army by the revolutionary government. The Kulikovskys were forced into exile, and he became a farmer and businessman in Denmark, where they lived until after World War II. In 1948, they emigrated to Canada as agricultural immigrants, but within four years of their arrival they had sold their farm and moved into a small suburban house. He became increasingly disabled by back pain, and died in 1958 aged 76.

Discuss this Nikolai Kulikovsky biography with the community: