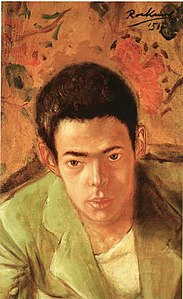 Who was Noel Rockmore?

Noel Rockmore was born Noel Montgomery Davis to his mother, Gladys Rockmore Davis, and his father, Floyd Davis, in New York City. Rockmore was an American painter, draughtsman, and sculptor. He claims to have produced more than 15,000 works of art in his lifetime. He is known for his portraits, his early rise to fame, his Preservation Hall portraits, and for changing his name at the height of the popularity he had developed in New York City

Noel painted in a realistic and old masters style throughout his childhood and adolescence. He experimented with different artistic theories, techniques, and ideas in the New York art world of the 1950s.

As the abstract expressionist movement gained momentum, Rockmore left New York and went to New Orleans, where he changed his name from Noel Davis to Noel Rockmore, adopting the surname of his mother. He spent the next 20 years commuting between New Orleans and New York City while various dealers tried unsuccessfully to manage him and his often, volatile career.

Discuss this Noel Rockmore biography with the community: