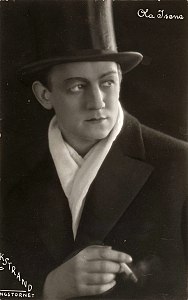 Who was Ola Isene?

Ola Isene was a Norwegian opera singer and actor.

Isene studied at the Musikkonservatoriet in Kristiania, and made his debut at the Mayol-teatret in 1923. His operatic roles were varied, among them Beckmesser in Die Meistersinger von Nürnberg, Scarpia in Tosca, and Amonasro in Aïda – most of them at the Nationaltheatret, which at the time had opera on its programme. He took part in many tours and also appeared in operettas, including as Schubert in Jomfruburet. In the middle of the 1930s, he moved to theatre and film as an actor.

Isene also played the title role in the three criminal radio plays Inspektør Scott på farten by John P. Wynn, which were broadcast by Norwegian Broadcasting Corporation radio in 1960 and 1961.

He was married to the teacher Haldis Isene.

Discuss this Ola Isene biography with the community: