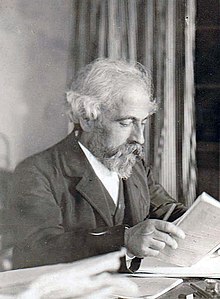 Who was Paul Sabatier?

Paul Sabatier, was a French clergyman and historian who produced the first modern biography of St. Francis of Assisi. He is the brother of Auguste Sabatier.

He was born at St. Michel de Chabrillanoux in the Cévennes, and was educated at the faculty of theology in Paris. In 1885 he became vicar of St Nicolas, Strasbourg, but in 1889, declining an offer of preferment which was conditional on his becoming a German subject, he was expelled.

For four years he was pastor of St. Cierge in the Cévennes and then devoted himself entirely to historical research. He had already produced an edition of the Didache, and in November 1893 published his important Life of Francis of Assisi. This book gave a great stimulus to the study of medieval literary and religious documents, especially of such as are connected with the history of the Franciscan Order. In 1908 he delivered the Jowett Lectures on Modernism at the Passmore Edwards Settlement, London.

Paul Sabatier's Life of St. Francis of Assisi was placed upon the Index of Forbidden Books by the Catholic Church because of the unreliable retelling of the saint's story.

In 1919, Sabatier became professor of Protestant theology at Strasbourg.

Discuss this Paul Sabatier biography with the community: