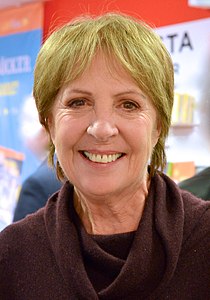 Who is Penelope Wilton?

Penelope Alice Wilton, OBE is an English actress of stage, film, and TV. She starred opposite Richard Briers in the BBC situation comedy Ever Decreasing Circles. She has also appeared in Doctor Who and the period drama Downton Abbey. She has twice won the Critics' Circle Theatre Award. Wilton has been married to two distinguished actors, Daniel Massey and Ian Holm. Until her success as Downton Abbey's Isobel Crawley, she was best known to American audiences for her portrayal of South African anti-apartheid activist Wendy Woods in the 1987 film Cry Freedom.

Discuss this Penelope Wilton biography with the community: