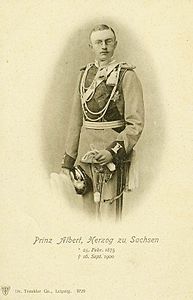 Who was Prince Albert of Saxony?

Prince Albert Karl Anton Ludwig Wilhelm Viktor of Saxony was a Saxon prince from the House of Wettin. He was the youngest son of King George and his consort, Maria Anna of Portugal.

He died on 16 September 1900 in a traffic accident. A phaeton driven by Prince Miguel of Braganza hit Albert's carriage so violently that the carriage overturned into a ditch. Albert died from his wounds a few hours later. There were rumours that Miguel had done this on purpose, but this was never proven. Because it could not be determined whether this was an accident or intentional, Miguel escaped a court martial. However, he had to resign from his army post and leave the country.

Discuss this Prince Albert of Saxony biography with the community: