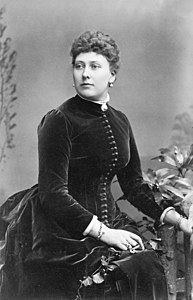 Princess Beatrice of the United Kingdom

Who was Princess Beatrice of the United Kingdom?

Princess Beatrice of the United Kingdom was the fifth daughter and youngest child of Queen Victoria and Prince Albert. King Juan Carlos of Spain is her great-grandson. Beatrice has the distinction of being the last of Queen Victoria's children to die, 66 years after the first, her sister Alice.

Beatrice's childhood coincided with Queen Victoria's grief following the death of her husband Albert, Prince Consort on 14 December 1861. As Beatrice's elder sisters married and left their mother, Queen Victoria came to rely on the company of her youngest daughter, whom she called Baby for most of her childhood. Beatrice was brought up to stay with her mother always and she soon resigned herself to her fate.

Queen Victoria was so set against her youngest daughter marrying that she refused to discuss the possibility. Nevertheless, many suitors were put forward, including Louis Napoléon, Prince Imperial, the son of the exiled Emperor Napoleon III of France, and Louis IV, Grand Duke of Hesse, the widower of Beatrice's older sister Alice. She was attracted to the Prince Imperial and there was talk of a possible marriage, but he was killed in the Anglo-Zulu War in 1879.

Discuss this Princess Beatrice of the United Kingdom biography with the community: