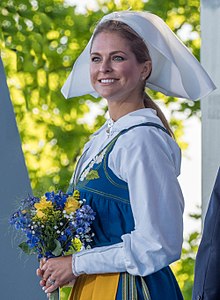 Who is Princess Madeleine, Duchess of Hälsingland and Gästrikland?

Princess Madeleine of Sweden, Duchess of Hälsingland and Gästrikland, is the youngest child and second daughter of King Carl XVI Gustaf and Queen Silvia of Sweden. Upon her birth, she was third in line of succession to the Swedish throne. After the birth of her niece, Princess Estelle, in February 2012, she became fourth in line of succession.

Discuss this Princess Madeleine, Duchess of Hälsingland and Gästrikland biography with the community: