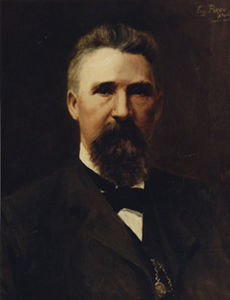 The son of a tobacco farmer, he worked for his father and attended Emory and Henry College from 1868 to 1870, eventually graduating from Bryant and Stratton Business College in Baltimore. He sold his share of the family business in 1874 and moved south to Winston-Salem, North Carolina to start his own tobacco company. Reynolds was a savvy businessman and a hard worker, and he quickly became one of the wealthiest citizens of Winston-Salem; eventually, he was the wealthiest person in the state of North Carolina. He died in 1918 of pancreatic cancer.

Discuss this R. J. Reynolds biography with the community: