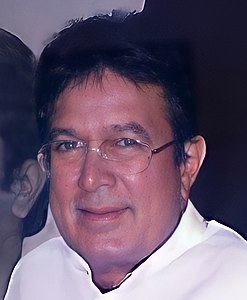 Who was Rajesh Khanna?

Rajesh Khanna was a Bollywood actor, film producer and politician. He is referred to as the "first superstar" and the "original superstar" of Indian cinema. He starred in 15 consecutive solo hit films in the period 1969 to 1971. In 1974, BBC made a film on him, titled Bombay Superstar. Khanna is regarded as one of the greatest and most influential actors in the history of Hindi cinema.

He married Dimple Kapadia in March 1973, eight months before her debut film Bobby was released and had two daughters from the marriage. Their elder daughter Twinkle Khanna is married to actor Akshay Kumar, while they also have a younger daughter Rinke Khanna.

He appeared in a total of 180 films - 163 feature films and 17 short films. He was the solo lead hero in 106 films. He won three Filmfare Best Actor Awards and was nominated for the same fourteen times. He received the most BFJA Awards for Best Actor – four times and nominated 25 times. In 1991, he was awarded the Filmfare Special Award for completing 25 years in the industry, and for appearing as the single lead hero in more films than any other male actor in Hindi films within 25 years of his debut.

Discuss this Rajesh Khanna biography with the community: