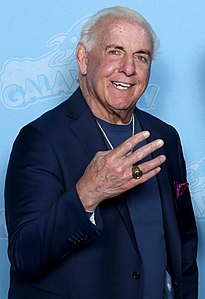 Who is Ric Flair?

Richard Morgan Fliehr is a semi-retired American professional wrestler, better known by his ring name Ric Flair. Also known as "The Nature Boy", Flair is considered to be one of the greatest professional wrestlers of all time with a professional career that spans 40 years. He is noted for his lengthy and highly decorated tenures with the National Wrestling Alliance, World Championship Wrestling and the World Wrestling Federation / and later World Wrestling Entertainment WWE, and Total Nonstop Action Wrestling. Flair is officially recognized by WWE, TNA, and PWI as a 16-time World Heavyweight Champion although actual number of his World Championship reigns varies by source; Flair considers himself as a 21-time World Champion in NWA, WCW, and WWF.

Discuss this Ric Flair biography with the community: