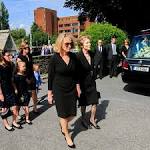 Who is Richard Johnson?

Richard Johnson was the President of the Irish High Court from November 2006 until October 2009. He was the second most senior Irish judge after the Chief Justice John L. Murray.

He was also under the terms of the Constitution of Ireland by virtue of that office an ex-officio member of the Supreme Court. In the absence of the Chief Justice, he acted as a member of the Presidential Commission.

Johnson was born in Tralee, County Kerry and studied law at University College Dublin. He qualified as a barrister at the King's Inns in 1960. He practised on the South Western Circuit until he became Senior Counsel in 1977. As a Senior Counsel he practised on the Munster Circuit and in Dublin until 1987. He was appointed to the High Court in 1987. His father was a district court judge for a number of years and his son and daughter are barristers. The Government nominated Mr Justice Nicholas Kearns on 7 October 2009.

Discuss this Richard Johnson biography with the community: