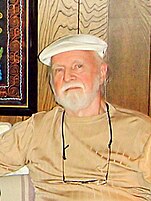 Who was Richard Matheson?

Richard Burton Matheson was an American author and screenwriter, primarily in the fantasy, horror, and science fiction genres. He may be known best as the author of I Am Legend, a 1954 horror novel that has been adapted for the screen four times, although six more of his novels or short stories have been adapted as major motion pictures: The Shrinking Man, Hell House, What Dreams May Come, Bid Time Return, A Stir of Echoes and Button, Button. Matheson also wrote numerous television episodes of The Twilight Zone for Rod Serling, including "Nightmare at 20,000 Feet" and "Steel". He later adapted his 1971 short story "Duel" as a screenplay which was promptly directed by a young Steven Spielberg, for the television movie of the same name.

Discuss this Richard Matheson biography with the community: