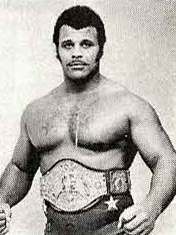 Who is Rocky Johnson?

Rocky Johnson is a retired Canadian professional wrestler. Quite popular in his own right in the 1970s and 1980s, he is also known for being the father of American actor and professional wrestler Dwayne "The Rock" Johnson. During his wrestling career, he became a National Wrestling Alliance Georgia Champion and a NWA Southern Heavyweight Memphis Champion, as well as winning many other championships. Along with his partner Tony Atlas, Johnson was a part of the first black tag team to win the World Tag Team championship in the World Wrestling Federation.

Discuss this Rocky Johnson biography with the community: