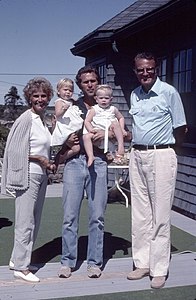 Who was Ruth Graham?

Ruth Bell Graham, wife of the famous evangelist Billy Graham, was born at Qingjiang, Jiangsu, China as Ruth McCue Bell, the second of five children. Her parents, Dr. L. Nelson Bell and Virginia McCue Bell, were medical missionaries at the Presbyterian Hospital 300 miles north of Shanghai. At the age of 13 she was enrolled in high school in Pyongyang, Korea, where she studied for three years. Ruth completed her high school education at Montreat, North Carolina, while her parents were there on furlough. She graduated from Wheaton College in Wheaton, Illinois.

The Grahams met at Wheaton College in Wheaton, Illinois and were married in the summer of 1943, shortly after their graduation. Ruth became a minister's wife for a brief period in Western Springs, Illinois. She lived out the rest of her life in Montreat, North Carolina. The Grahams have five children: Virginia, Anne, Ruth, Franklin and Nelson Edman, nineteen grandchildren, and numerous great grandchildren. Grandson Tullian Tchividjian is senior pastor of Coral Ridge Presbyterian Church in Fort Lauderdale, Florida.

Discuss this Ruth Graham biography with the community: