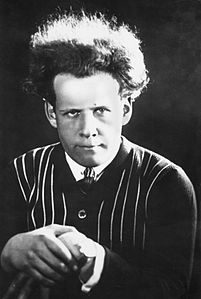 Who was Sergei Eisenstein?

Sergei Mikhailovich Eisenstein was a Soviet Russian film director and film theorist, a pioneer in the theory and practice of montage. He is noted in particular for his silent films Strike, Battleship Potemkin and October, as well as the historical epics Alexander Nevsky and Ivan the Terrible.

Discuss this Sergei Eisenstein biography with the community: