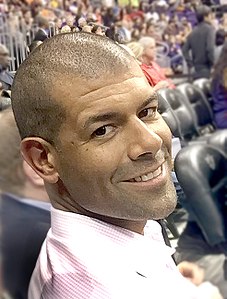 Who is Shane Battier?

Shane Courtney Battier is an American professional basketball player who currently plays for the Miami Heat of the National Basketball Association. He has also been a member of the U.S. national team.

Battier was born and raised in Birmingham, Michigan, and attended Detroit Country Day School in nearby Beverly Hills, where he won many awards including the 1997 Mr. Basketball award. He went on to play four years of college basketball at Duke, where he captured the 2001 National Championship and swept the major National Player of the Year awards. Battier was selected with the sixth overall pick of the 2001 NBA Draft by the Vancouver Grizzlies. He was traded five years later to the Houston Rockets, and was then traded back to the Memphis Grizzlies during the 2010–2011 NBA season. He signed with the Miami Heat in 2011. His number has been retired by both Detroit Country Day School and Duke University. He has been recognized for his aggressive defense and has "routinely ­guarded the league's most dangerous offensive players". He is the only basketball player to have ever won both the Naismith Prep Player of the Year Award and the Naismith College Player of the Year.

Discuss this Shane Battier biography with the community: