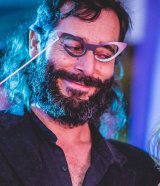 Who is Subhira Rodrigo Cepeda?

He studied COMPOSITION AND ARRANGEMENTS at the Modern School of Music, graduating with maximum distinction in 1995. On 2011 receives the National Music Award "President of the Republic". On 2015 ends the postgraduate specialization on Composition and on 2017 Completes the Master Of the Arts-Composition both at the University of Chile.

- He is professor of "Composition III" at the Modern School of Music University and produces and conducts the open air Radio program "Mundovivo, Música para Vivir Mejor" (www.adn.cl 40.000 people audience a week)

Discuss this Subhira Rodrigo Cepeda biography with the community: