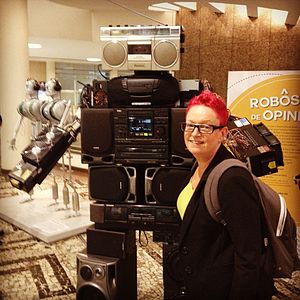 Who is Sue Black?

Dr Sue Black FBCS FRSA is an English computer scientist. She is a Senior Research Associate at University College London, England. Previously she was Head of the Department of Information and Software Systems at the University of Westminster, London. Sue Black founded BCSWomen, a Specialist Group of the British Computer Society, in 2001, and was chair of the group until 2008. She has been instrumental in championing the saving of Bletchley Park.

Black was the founding chair of the BCS Specialist Group BCSWomen and is an advocate of women in computing.

Black runs a blog to help raise awareness of and funding for Bletchley Park, the UK World War II centre for decrypting enemy messages. She has also used other Web 2.0 technologies such as Facebook and Twitter for this purpose. She has appeared on BBC television, radio and in press articles.

Discuss this Sue Black biography with the community: