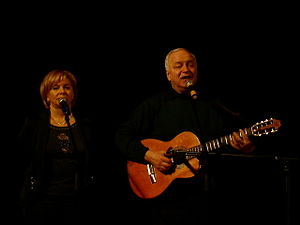 Who is Tatyana Khashimovna Nikitina?

Tatyana Khashimovna Nikitina is a prominent Russian bard. She usually performs together with her husband, Sergey Nikitin.

She was born Tatiana Sadykova in Dushanbe on December 31, 1945. In 1971, she graduated from the Department of Physics of Moscow State University. In 1968, she began singing in a quintet led by her husband, Sergey Nikitin. They worked together as biophysicists as well as singers, creating many popular songs. Together they recorded more than 15 CDs and Vinyls.

In 1990, she abandoned her research work to become the Manager for Culture of the October District ispolkom of Moscow, then became Deputy Prefect of the Central District of Moscow, and in 1992–1995 she was a deputy to the Minister for Culture of Russia. Since 1995, she has worked as a manager at Kartina, an Italian firm that organizes art exhibitions.

Discuss this Tatyana Khashimovna Nikitina biography with the community: