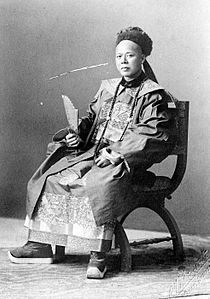 Who was Tjong A Fie?

Tjong A Fie, or Tjong Yiauw Hian, was a Hakka Chinese businessman, banker and kapitan who built a large plantation business in Sumatra, Indonesia. Tjong A Fie built his business that employed more than 10,000 labor workers. Because of his great success, he maintained a good relationship with the ruler of Deli, including Sultan Deli Makmun Al Rasjid and Dutch authorities. In 1911, Tjong A Fie was appointed as a Kapitan Cina or major of Chinese community in Medan, replaced his late brother, Tjong Yong Hian. As a Chinese community top leader, he was well-thought-of and respected by people, because he was linked with economy and political systems of the city. His enterprises were invested in his plantations, palm oil and sugar factories, bank and railroad.

Discuss this Tjong A Fie biography with the community: