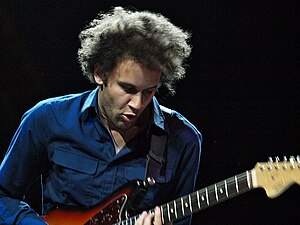 Tyondai Braxton is an American composer and performer. He has been writing and performing music under his own name and collaboratively under various group titles and collectives since the mid-90s. Raised in Connecticut and Northern California, Braxton is the son of multi-instrumentalist and avant-garde composer and improviser Anthony Braxton. He studied composition at The Hartt School of the University of Hartford in West Hartford, Connecticut with Robert Carl, Ingram Marshall and Ken Steen. His signature "orchestrated loops" involve real-time overlaying of guitar, voice and found objects – designed to simulate an ensemble. Tyondai is also the former guitarist and vocalist of the avant-rock group Battles.

Discuss this Tyondai Braxton biography with the community: