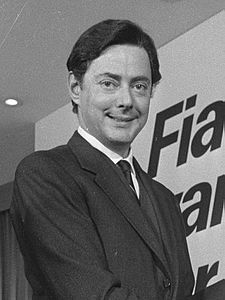 Who was Umberto Agnelli?

Umberto Agnelli was an Italian industrialist and politician. He was the youngest brother of Gianni Agnelli.

He served as a CEO of Italian carmaker Fiat from 1970 to 1976 and, on the death of his brother Gianni, was briefly chairman of the FIAT Group, 2003-2004, until his own death, aged 69, the following year. He was also chairman and later honorary chairman of the Juventus, the soccer team long-associated with FIAT and the Agnelli family, and was for a time the president of the Italian Football Association. He was a senator of the Italian Republic, from 1976 to 1979.

Discuss this Umberto Agnelli biography with the community: