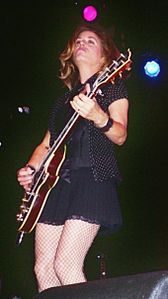 Who is Vicki Peterson?

She described herself as a solo artist in her early years - "I was a kid who brought her guitar to every sleep-over and summer afternoon in the park to play her newest creation to anyone who would listen…". In 1981, she founded The Bangs, later renamed The Bangles, with her sister Debbi Peterson, and Susanna Hoffs.

After The Bangles disbanded in 1989, Peterson played with the Continental Drifters and The Psycho Sisters, in both cases alongside Susan Cowsill. In addition to performing their own material, The Psycho Sisters freelanced as celebrity backing singers, and Peterson has also contributed harmony vocals to recordings by the Hoodoo Gurus, John Doe, Tom Petty and Belinda Carlisle. Additionally, she replaced a pregnant Charlotte Caffey on the 1994–95 Go-Go's reunion tour.

Discuss this Vicki Peterson biography with the community: