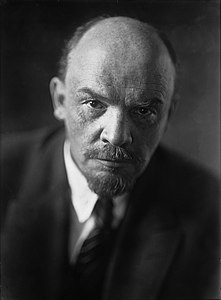 Who was Vladimir Lenin?

Vladimir Ilyich Lenin was a Russian communist revolutionary, politician and political theorist. He served as the leader of the Russian SFSR from 1917, and then concurrently as Premier of the Soviet Union from 1922, until his death. Politically a Marxist, his theoretical contributions to Marxist thought are known as Leninism, which coupled with Marxian economic theory have collectively come to be known as Marxism–Leninism.

Born to a wealthy middle-class family in Simbirsk, Lenin gained an interest in revolutionary leftist politics following the execution of his brother in 1887. Briefly attending the Kazan State University, he was ejected for his involvement in anti-Tsarist protests, devoting the following years to gaining a law degree and to radical politics, becoming a Marxist. In 1893 he moved to St. Petersburg, becoming a senior figure within the League of Struggle for the Emancipation of the Working Class. Arrested for sedition and exiled to Siberia for three years, he married Nadezhda Krupskaya, and fled to Western Europe, living in Germany, England and Switzerland. Following the February Revolution of 1917, in which the Tsar was overthrown and a provisional government took power, he returned home.

Discuss this Vladimir Lenin biography with the community: