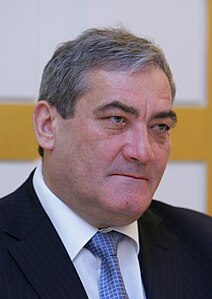 Vyacheslav Anatolyevich Shtyrov is a Russian businessman who ran the diamond mining giant Almazy Rossii-Sakha from 1996 to 2002. He joined ALROSA in 1975. In 2004 it was reported that he owns 0.14% of ALROSA. In 2002 he became a politician and was elected the president of the Sakha Republic, a federal subject of Russia. He took office on January 27, 2002 after being elected in an election which took two rounds. He received 52.25% of the vote in the runoff. He left office on May 31, 2010 for personal reasons. Later he became the Chairman of the Federation Council at the Federal Assembly of the Russian Federation.

Discuss this Vyacheslav Shtyrov biography with the community: