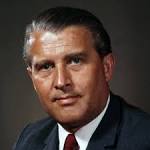 Who was Wernher von Braun?

Wernher Magnus Maximilian, Freiherr von Braun was a German rocket engineer and space architect. He was one of the leading figures in the development of rocket technology in Germany during World War II and, subsequently, in the United States. He is credited as being the "Father of Rocket Science".

In his 20s and early 30s, von Braun was the central figure in the Nazis' rocket development program, responsible for the design and realization of the V-2 combat rocket during World War II. After the war, he and some select members of his rocket team were taken to the United States as part of the then-secret Operation Paperclip. Von Braun worked on the United States Army intermediate range ballistic missile program before his group was assimilated by NASA. Under NASA, he served as director of the newly formed Marshall Space Flight Center and as the chief architect of the Saturn V launch vehicle, the superbooster that propelled the Apollo spacecraft to the Moon. According to one NASA source, he is "without doubt, the greatest rocket scientist in history". His crowning achievement was to lead the development of the Saturn V booster rocket that helped land the first men on the Moon in July 1969. In 1975 he received the National Medal of Science.

Discuss this Wernher von Braun biography with the community: