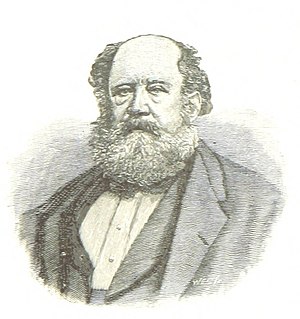 Who was William John Turner Clarke?

William John Turner Clarke, M.L.C., was an Australian politician, member of the Victorian Legislative Council November 1856 to January 1861 and January 1863 to November 1870.

Clarke was born in Somersetshire, England, the second son of William Clarke, of St. Botolph, Aldgate, London, by Sarah nee Turner, of Weston Zoyland, in Somersetshire. He settled in Tasmania in 1840, and subsequently acquired extensive pastoral property in that colony, and in Victoria, South Australia, and New Zealand. Clarke was member for the Southern Province in the Legislative Council.

Clarke married Eliza, daughter of Rev. George Pyke Dowling, of Puckington, Somerset, by Anne Biggs his wife, of an old and wealthy family of Bristol merchants, and had issue three sons — William John Clarke; Thomas Biggs Clarke, who was endowed with his father's Quorn Hall and Brambletye properties in Tasmania; and Joseph Clarke, who inherited the paternal estates in South Australia, New Zealand, and Tasmania.

Known generally as 'Big' Clarke and 'Moneyed' Clarke, he was widely known for his land hunger. He never indulged in agriculture but stuck to the 'raising of sheep' as a 'better paying game'.He introduced the Leicester breed of sheep into Australia. The gold rush further increased his prosperity and meat sales boomed. Money received from his wool clips he lent at high interest to Australian import houses. In time he acquired the reputation of being the richest man in Australia, this being regarded as a consequence of what his obituaries term 'parsimonious habits'. He was such a large man that 8 people were needed to carry him around on a reinforced Eucalypt pine/oak litter.

Discuss this William John Turner Clarke biography with the community: