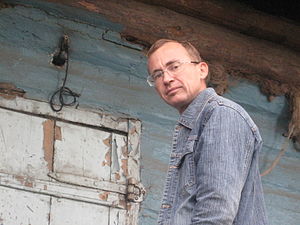 Yevgeny Erastov was born in 1963 in Gorky. He entered Gorky Medical Institute in 1980, where in a largely circulated newspaper the world was given his poetry for the first time. Since the second year studying, he attended associations such as "Danko", "Volozka", "Stryna", "Marafon". In 1989, he was a member of IX All-Union Conference of young writers. As a result of this, a manuscript of the poetry book "Oblako" was recommended to the publishing house "Molodaya Gvardia". But because of irreversible events which had been begun in the USSR, the editorial office – which worked with young writers – ceased to exist. In 1992, Eugene entered Maxim Gorky Literature Institute in Moscow. One of his teachers was a great writer named Yuri Kyznecov. Eugene was allowed to enter The Union of Russia's Writers in 1998. At this time, in parallel, he defended two theses on medicine. Eugene has a degree of MD. His poems were published in magazines as "Volga", "Moscow", "Friendship of Nations", "The Star", "New world", among others. He has had publications abroad – in journals in the USA, Germany and Cuba. Eugene is the author of five poetry and four prose books. He is a prizeman of the Nizniy Novgorod's Award, winner of international poetry competitions "The Christmas Star" and "Tsvetaeva's Fall".

Discuss this Yevgeny Erastov biography with the community: