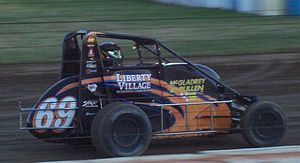 A.J. Fike is an American racecar driver. He was born on December 29, 1980 and resides in Galesburg, Illinois. He is the older brother of NASCAR driver Aaron Fike. Fike won the 1999 United States Auto Club Midget Car rookie of the year title and his younger brother Aaron Fike won the award the following season making them the first brothers to win the award in back to back season. He later drove in several NASCAR races.

Discuss this A. J. Fike biography with the community: