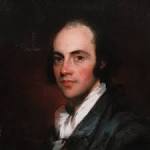 Who was Aaron Burr?

Aaron Burr, Jr. was the third Vice President of the United States; he served during President Thomas Jefferson's first term.

After serving as a Continental Army officer in the Revolutionary War, Burr became a successful lawyer and politician. He was elected twice to the New York State Assembly, was appointed New York State Attorney General, was chosen as a United States Senator from the state of New York, and reached the apex of his career as Vice President.

The highlight of Burr's tenure as President of the Senate was the Senate's first impeachment trial, of Supreme Court Justice Samuel Chase. In 1804, the last full year of his single term as Vice President, Burr killed his political rival Alexander Hamilton in a famous duel. Burr was never tried for the illegal duel, and all charges against him were eventually dropped. The death of Hamilton, however, ended Burr's political career. President Jefferson dropped him from the ticket for the 1804 presidential election, and he never held office again.

After leaving Washington, Burr traveled west seeking new opportunities, both economic and political. His activities eventually led to his arrest on charges of treason in 1807. Although the subsequent trial resulted in acquittal, Burr's western schemes left him with large debts and few influential friends. In a final quest for grand opportunities, he left the United States for Europe. He remained overseas until 1812, when he returned to the United States to practice law in New York City. There he spent the remainder of his long life in relative obscurity.

Discuss this Aaron Burr biography with the community: