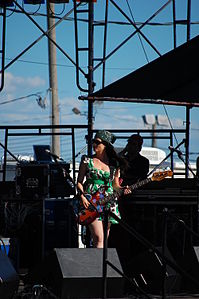 Who is Abby Travis?

Abby Travis is an American musician, songwriter, and performer. She is the daughter of Alice Travis Germond, the current Secretary of the Democratic National Committee and Emmy award winning cameraman Larry Travis.

Abby Travis began her performance career in 1986 as the bassist in Los Angeles band The Lovedolls, who were spawned from the cult films Desperate Teenage Lovedolls and "Lovedolls Superstar" directed by Dave Markey. In 1989 Travis joined power pop trio The Rails. In 1993 Travis began working as a bass player for hire. She has toured, recorded, or both with Vanessa Paradis, Beck, Elastica, Michael Penn, Exene Cervenka's Original Sinners, Gibby Haynes and His Problem, KMFDM, The Meat Puppets, El Vez, and The Bangles among others.

She is scheduled to fill in for injured Go-Go's bassist Kathy Valentine for the second half of their 2012 tour. http://www.facebook.com/GoGosOfficial

Discuss this Abby Travis biography with the community: