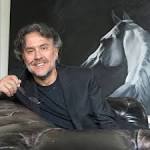 Who is Abdullah Oğuz?

Abdullah Oguz is a Turkish film director and producer.

Oguz studied at Marmara University. From 1990 to 2000 he produced and directed commercials, TV series and music videos, and later, feature films.

Discuss this Abdullah Oğuz biography with the community: