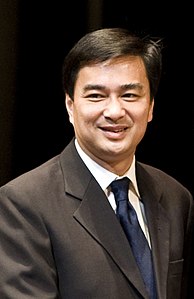 Who is Abhisit Vejjajiva?

Abhisit Vejjajiva is a Thai politician who was the 27th Prime Minister of Thailand from 2008 to 2011 and is the current leader of the Democrat Party. As leader of the second largest party in the House of Representatives, he is also Leader of the Opposition - a position he held since December 2008. In December 2013, he was formally charged with murder resulting from a crackdown on demonstrators in 2010 that killed 90 people.

Born in England, Abhisit attended Eton College and earned bachelors and masters degrees from the University of Oxford. He was elected to the Parliament of Thailand at age 27, and promoted to Democrat Party leader in 2005, after his predecessor resigned following the party's defeat in the 2005 general election.

Abhisit became Premier at a time of global economic turmoil and rising domestic political tensions. As prime minister, he promoted a "People’s Agenda," which focused primarily on policies affecting the living conditions of Thailand's rural and working class citizens. He administered two economic stimulus packages: a $40 billion, three-year infrastructure improvement plan, and a more than $3 billion program of cash subsidies and handouts. By 2010, the stock market and the value of the baht had rebounded to their highest levels since the 1997 Asian Financial Crisis. Human Rights Watch called Abhisit "the most prolific censor in recent Thai history" and Freedom House downgraded Thailand's rating of media freedom to "not free." Abhisit also advocated for stronger anti-corruption measures, although several members of his Cabinet resigned due to corruption scandals and parts of his economic stimulus packages were criticized for instances of alleged corruption.

Discuss this Abhisit Vejjajiva biography with the community: