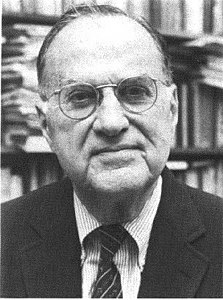 Who was Abram Bergson?

Abram Bergson was an American economist.

In a 1938 paper Bergson defined and discussed the notion of an individualistic social welfare function. The paper delineated necessary marginal conditions for economic efficiency, relative to:

In so doing, it showed how welfare economics could dispense with interpersonally-comparable cardinal utility, either individually or in the aggregate, with no loss of behavioral significance.

Bergson was chief of the Russian Economic subdivision of the Office of Strategic Services during World War II. After the war he taught at Columbia University and Harvard University. He was elected a Fellow of the American Academy of Arts and Sciences in 1963. From 1964, he was director of the Harvard Russian Research Center and became chairman of the Social Sciences Advisory Board of the U.S. Arms Control and Disarmament Agency.

His main contribution to the study of the Soviet Union was the development and implementation of a method for the calculation of national output and economic growth in the absence of market valuation.

Discuss this Abram Bergson biography with the community: