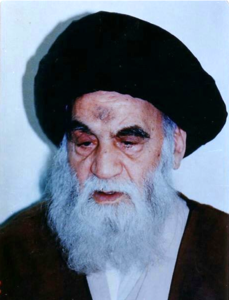 Who was Abu al-Qasim al-Khoei?

Abu al-Qasim al-Khoei AH-boo al KAH-sihm al HOO-EEE was one of the most influential Twelver Shia Islamic scholars, and the predecessor to Ali al-Sistani. He was the spiritual leader of much of the Shia world until his death in 1992. He was succeeded by Ali al-Sistani, his former student, whereby many of his followers became followers of Al Sistani and foundations previously headed by Khoei were handed to Al Sistani.

Discuss this Abu al-Qasim al-Khoei biography with the community: