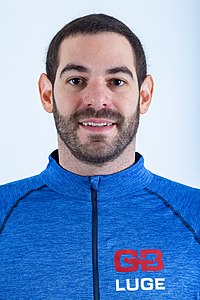 Who is Adam Rosen?

Rosen's best finish at the FIL World Luge Championships was 24th in the men's singles event at Igls in 2007.

A native of New Rochelle, New York, Rosen works for the New York Civil Air Patrol, earning a Cadet Senior Master Sergeant rank in 2001. He was named for his grandfather who served aboard the HMS Sussex for the Royal Navy during World War II.

He also had the best ever result for a British Luge athlete when he finished in 6th Place at the Viessman Luge World Cup in Calgary, Canada during the 2008-2009 World Cup Season.

Discuss this Adam Rosen biography with the community: