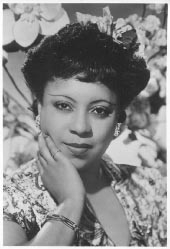 Who was Adelaide Hall?

Adelaide Louise Hall was an American-born U.K.-based jazz singer and entertainer. Her career spanned more than seventy years from 1921 until her death and she was a major figure in the Harlem Renaissance.

Adelaide was born in Brooklyn, New York, to Elizabeth and Arthur William Hall and was taught to sing by her father. She began her stage career in 1921 on Broadway in the chorus line of the Broadway musical Shuffle Along and went on to appear in a number of similar black musical shows including Runnin' Wild on Broadway in 1923, Chocolate Kiddies in 1925 that included songs written by Duke Ellington, My Magnolia on Broadway in 1926, Tan Town Topics with songs written by Fats Waller and in Desires of 1927.

Discuss this Adelaide Hall biography with the community: